Run for a Cause

I was one of the last registrants for the 34th Milo Marathon in Dagupan City. It was only for the favor of a friend’s  friend who happened to be part of the organizing team of the marathon that I was officially registered in the 10k category. I preferred that category, first, because there’s no more available shirt for 5K that suited me, and second, I thought 10k was just enough for me. 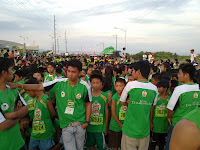 I was so excited to run, jog, and walk that I slept late. I’ve got only 4 hours sleep before the run. I was at the assembly at 5:30am, and I felt so young surrounded by youngsters. I didn’t know where to go, where to place my backpack. Thanks to the foreigner, an Iranian I guessed, who directed me to the assembly where the 10K runners were located. I pinned my bib number 10225 quickly and looked for my place. At exactly 6am, we’re all running…


It was never my goal to win the marathon. I definitely knew that I cannot outsmart and outrun those policemen, army, and real marathoners. I just wanted to run, to participate and help give shoes to less fortunate children. I just wanted to celebrate that Sunday for a cause. And yes, it’s also my father’s birthday! (July 11) 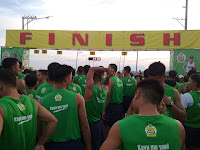 There were funny moments during the run. Few meters away from the starting line, policemen and even, women, had to hide from a safe corner to pee along the Lucao-Pantal-Dawel diversion road. They didn’t mind the hundreds of runners passing through them. I, myself, had to catch the perfect timing and place where I could pee.
Because I ran alone, there were times that I had to be in cadence to other runners. I wanted to talk to my fellow runners. Then I came to know that some runners joined for compliance, and they were complaining for another sacrifice. I also heard the discourse of those policewomen with “clean cuts”, irritated because they were mistaken to be men by watchers.
There were people teasing, clapping, and yelling to show their support. Some were surprised to see me running, some took pictures of and with me. Some told me that I should have run together with my cameraman. But honestly, I was serious and wondering then if I could finish the 10k run. “Mukhang napasubo ata ako ah,” I said to myself. 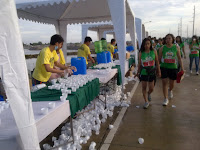 I praised God for the hydration station where every runner could drink. Sweat all over the body was indeed noticeable to every runner. That’s why disposable cups were scattered during and after the run, and putting it at the proper place was inevitably forgotten. I think not every runner knew their purpose of running. But if it’s for the sake of fun and enjoyment, it really was.

An activity like this gives me a time for reflection. While running, I thought of completing the task the Lord has entrusted me to do. I realized I am failing, and I always disappoint Him. But I also realized the reason why I keep on running, why resting and taking it slow were sometimes needed. Because the moment I entered the finish line, I could still consider myself a victor. I finished the 10k run, and it’s an achieved goal. 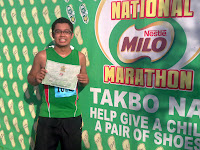 It’s a reality that people have different strides. Sometimes, they take it fast, others take it slow. I believe what is important is how you accomplish your goal in life, with faithfulness, sincerity and trust.
I admire those who run fast, and finish the race still with strength and vigor.  I might be the last one running in the 10k category, but I don’t envy those who run ahead of me. I am contended with what I have accomplished because I know my goal. Besides, I’m not in a hurry. And God, in my life, isn’t in a hurry too. †


(Sorry for the late posting) :)
Posted by Alfie 3 comments: